My first weeks in the forest

“Make sure you shake your boots in the morning before putting them on. You never know what will be inside.” was how the other volunteer, Margaret, introduced me to the morning routines of a day in the forest.

On the forest days, I wake up at 3.50. Waking up so early, I am always slightly confused, and telling myself that being awake at this time should mean that I am going to sleep after a night out, or waking up from a nightmare and not actually, and seriously, starting my day. But it is also so much better! I then meet with the other girls at 4.30. The day usually starts with Margaret telling us about her adventures with the insects and bats in her room. Or sometimes, she won’t talk much because she stayed up watching wildlife shows too late. Vanessa, on the other hand, is always very alert as she has been awake for longer than both of us – she usually needs at least 3 hours to get ready in the morning.

We start walking to the trees where the monkeys sleep. On my first day, I was surprised to hear the girls counting the monkeys they could see on the branches. To me, even wearing my glasses or using the binoculars, all I could see was little black spots on the trees – nothing that could be considered as monkeys. Then, for the first time of my life, I could see the monkeys starting to wake up. They would eventually jump from one branch to another, from one tree to another. I could see their long tails dancing, and sometimes, even two tails when the mothers were holding their baby on their back.

Once they were all moving, we would start to follow them. I was amazed to see how those little monkeys could jump and was always worried that one would eventually fall down. We would see them eating plants, and Vanessa would explain what type of plants it was, how to recognize them and so on. From Inga to Miconia schlimii, a new world was opening its door to me as I was discovering more and more about the plants of the forest.

At the sight of a snake on my first day, touching a tree full of spices, being stung by 3 wasps, falling down multiple times, I soon acknowledged how important it is to be careful. But asides from the obvious risks associated with the forest, more importantly, I learned that the jungle never stops to amaze me. Everything seemed to have been thought carefully before, as following some kind of mathematical formulas. I learned that the monkeys only sleep in a palm tree with spices all over the trunk to prevent animals to climb over, I learned that the leaves of some plants, like the Costaceae, would be organized in a spiral, to allow the sun to shine on all of them, without the leaves shadowing the ones below.

Walking in the forest for 12 to 13 hours is very tiring – especially when we lose the monkeys and have to look for them. But as well as being physically tiring, there is something special about spending this much time in the forest, it seems to calm your mind, and allow you to be more observant and focus on the present. We constantly need our senses to be alert, pay close attention to what we touch, smell, hear and see. Something we may forget to do in everyday life, by focusing too much on what goes inside our mind rather than on the outside world and on us as wholes anchored in the environment. 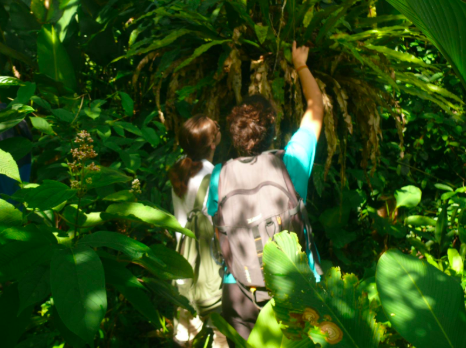